Memorial Celebration for Tom Locke to be held at UADC 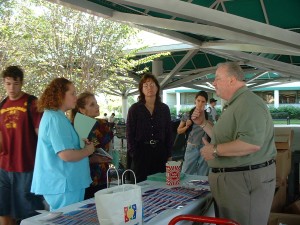 If it were not for the abiding interest, leadership and advocacy by Tom Locke over the years, going back to 1994, the New North Transportation Alliance would not have accomplished all that it has.  Tom was long-time Chair and Vice Chair of NNTA, formerly known as the University North Transportation Initiative (UNTI).

Tom had developed a large network of contacts in the community business arena.  Having moved recently from Chicago, he was aware of the effects that rapid urbanization has upon the transportation system and mobility of the community.  He was well attuned to the needs of private businesses in the area, especially on issues of transportation access, employee recruitment and retention, and safety.  He became personally involved in other related issues, primarily regional planning activities that will set the course of major transportation investments for the next forty years. This involvement made him well known and respected in the transportation community and articulate about the issues.  Tom’s participation in NNTA has been responsible for much of the momentum and focus of the organization.  He understood the importance of reminding NNTA members periodically of its many accomplishments.

In partnership with USF, Tom initiated and provided support for the Mall Express, a noon-time shuttle service between USF and the University Mall.  This later expanded into the USF Bull Runner.

Tom facilitated meetings and discussions about a host of local transportation issues, including the proposed East/West Connector, Bruce B. Downs Blvd. corridor safety, and the need for bike lanes on 42nd Street.

Early in Tom’s tenure as Chair, he was recognized by then Tampa City Councilman Bob Buckhorn for his civic activities. Tom was a member of the Committee of 99, an advisory group to the Hillsborough County Commission that considered various transportation improvement scenarios during the late 1990’s.  Ten years later, he served as a stakeholder to the Light Rail Alternatives Analysis and for HART’s MetroRapid bus rapid transit service. More recently, Tom advocated tirelessly on behalf of the completion of multimodal street and safety improvements to 22nd Street as part of his work with our partner, the University Area Community Development Corporation.  It was Tom’s idea to hold the Transportation EXPO at USF in September 2010.

Through Tom’s devoted advocacy, the New North area continues to improve for its residents and commuters. His support for the good work of the NNTA was consistent and enthusiastic, resulting in many transportation choice improvements with more yet to be realized in the years to come. We will miss Tom’s leadership and persona tremendously.